Congratulations! Getting and being engaged is one of the most exciting times in one's life. And, if you are getting married in the next few months, you are likely doing the work to reschedule any wedding plans for early fall, or even next spring due to COVID-19. So, now is the ideal time (after choosing your new wedding date, of course) to consider a prenuptial agreement if you have not done so already. And, you are not alone in this consideration- more than ever, engaged couples in Massachusetts are opting for a prenuptial agreement, which can provide many benefits to both those with significant assets and even for individuals of modest means. In the event of a divorce (we know, nobody likes to talk about this while planning a wedding, but statistically a large portion of the population divorce) a properly drafted and executed Massachusetts prenuptial agreement is likely to save the parties considerable time and expense frequently associated with a divorce by establishing the division of assets, debt and alimony obligations that would go into effect in the event of a divorce. In addition, a prenuptial agreement can help both parties clarify each other's assets- do you have savings? student loans? Significant inheritance? And, what will happen to these assets or debt once you are married? A prenup can address and resolve any questions around these issues, bringing clarity to your relationship. So, as your (new) wedding date approaches, consider speaking with your fiancé about how your marriage (and finances!) could benefit from a prenuptial agreement.

Do I need a Prenuptial Agreement?

The "Why?" Generally, couples enter into a Massachusetts Prenuptial Agreement for two main reasons: (a) doing so may help clarify the financial expectations and obligations for the couple and; (b) a Prenuptial Agreement has the potential to save the parties considerable time and expense associated with a divorce by outlining the division of assets, debt and alimony obligations prior to marriage, making divorce proceedings less litigious and more straightforward. Although uncomfortable to discuss prior to entering into a marriage, the reality is that about 40-50% of marriages (nationwide) end in divorce, and first marriages last an average of 8 years (source: Statista.com). Ignoring this statistic altogether seems foolish, doesn’t it?

Second Marriages Can Benefit Too. If you are entering into a second marriage, a Prenuptial Agreement can preserve assets and inheritance for your children of a previous relationship - rather than potentially allowing those assets to be considered marital, and subject to division with your spouse from a second marriage upon a divorce.

The Prenup Conversation Can be Uncomfortable but Will Bring Clarity. Although there are many couples that could benefit from a prenuptial agreement, many are hesitant to bring it up with their fiancé before marriage- let's be honest, the conversation could feel awkward! One specific instance where a prenuptial agreement is incredibly important but feels very uncomfortable, is when one of the future spouses has incurred a large amount of debt before the marriage, either by way of student loans, of credit card debt, but the other future spouse has significant assets. Without a prenuptial agreement, this wealth disparity can be easier to ignore, but will leave both parties feeling a little bit on edge- what assets are marital? With a prenuptial agreement, there is great clarity on what assets or debt are intended to be considered marital, how each party will contribute to a joint bank account (if at all), and how property purchased in the future will be handled.

What goes into a Prenuptial Agreement?

In order to increase the likelihood of enforcement of a Massachusetts prenuptial agreement, it is recommended that couples each hire an attorney to represent them, be prepared to disclose all of their assets and debts, and be ready to discuss what they wish to remain "separate property" and "marital property."

Full and fair financial disclosure. Full and fair disclosure of assets is essential to enforcement of a prenuptial agreement, and both parties must adhere to this important disclosure requirement. This disclosure may include income, bank accounts, business ownership, investments, and properties owned by either partner, debts, etc. If either party fails to fully and fairly disclose all assets, a judge may deem the prenuptial agreement as unenforceable down the road.

Separate Property vs. Marital Property. Prenuptial agreements typically include terms that identify which of each spouse’s property would be considered “separate” property and “marital” property. Also addressed, is how marital property should be divided in the event of a divorce, and whether spousal support is to be paid upon termination of the marriage.

Other individuals having considered including “social media” clauses in their prenuptial agreements. Similar to the infidelity clauses, this clause outlines the limits of social media behavior for each spouse during the marriage. For example, a social media clause may forbid the spouses from posting certain content on their public profiles such as Facebook or Instagram. The clause may also detail acceptable contact between the parties and third parties on private features of social media sites such as Facebook messenger. Failure to adhere to the guidelines set forth in the prenuptial agreement may result in a financial reward to the compliant spouse at the expense of the noncompliant spouse.

While many couples find that the addition of lifestyle clauses to their prenuptial agreements may help them successfully identify common goals for spouse conduct during their marriage, they should ensure that the clauses are drafted very, very carefully so that the language reflects their intent. For example, an infidelity clause must specifically state what conduct is considered “cheating”, and a social media clause should be drafted so that the parties' expectations are clear. Prior to including these clauses, there should be extensive communication and agreement between future spouses and their attorneys about their goals and what they intend to outline as prohibited behavior, as well as the likelihood of enforcement in each instance. The answer to the question of enforcement is highly dependent on the individual situation.

The process of negotiating a prenuptial agreement that includes a lifestyle clause may in itself help build the foundation for a secure and lasting marriage, even in the case where the desired provisions may not be fully enforceable. Communication with your future spouse about your respective expectations and goals for each other during the course oof your marriage may help you identify issues and problem areas that need to be addressed and resolved.

Can a Prenuptial Agreement Be Contested?

What if My Fiancé Does Not Want a Prenuptial Agreement in the First Place?

If you’re interested in a prenup — and by all means, you should be — it can be awkward to bring the conversation up with your partner. It can certainly put a damper on wedding preparations if your fiancé is dead-set against getting a prenuptial agreement. The key when considering a prenuptial agreement is that it is not about approaching your marriage by anticipating divorce. Unfortunately, that’s what your partner may be thinking when you bring it up.

Some of the things your fiancé(é) may be thinking:

The above thoughts suggest that your partner is feeling inadequate and they may feel as if their love, opinion, or assets are not enough. Luckily, this is an opportunity to show your partner that a prenup doesn’t have to be viewed as a negative.

It is important to consider the possible future implications of leaving your assets and financial future vulnerable for the sake of avoiding this conversation with your partner. In addition, being open to compromise is a great predictor for a healthy marriage. Being able to find common ground in a difficult situation, and creating a prenuptial agreement that you’re both comfortable with is imperative. Above all else, be sure that all conversations about a prenup are founded in love, patience, and knowledge. By handling the discussion surrounding a Massachusetts prenuptial agreement with kindness and maturity, it’ll be much easier for your partner to see where you are coming from.

To speak with a lawyer about a prenuptial agreement, contact Mavrides Law in Boston, MA. To schedule an in-depth initial consultation, call 617-723-9900 or contact the firm at info@mavrideslaw.com 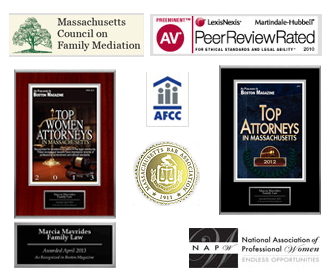